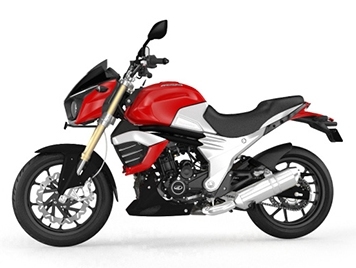 Mahindra two wheelers is well known for launching much hyped scooters in the Indian automobile market. Even though the company is not much successful in the scooter segment, but never compromises in introducing innovative motorcycles in the Automobile segment. With its new array of motorcycles, the two wheeler has occupied second place at the world’s largest bike segment. Due to the high demand for powerful bike in the Indian customers, the company has announced a big beast aiming the world’s biking enthusiasts. Currently, the Indian bike segment is waving with the launch of motorcycles under the 200 – 300cc segment. The new vehicle from Mahindra two wheelers has christened as Mahindra Mojo which is to be a powerful bike with 300 cc displacement. With its attractive looks and efficient powertrain, the bike will sure grab the hearts of the biking enthusiasts in the global bike market.

The company has never compromised regarding the specifications of this bike and will sure give tough fight to the other likes such as the Pulsar 200 NS, KTM Duke 200, Honda CBR25o, Kawasaki Ninja 250 and Hyosung GT250R. During the launch event, Mr. P.S. Ashok, Senior Vice President and Head of R&D at Mahindra 2 Wheelers has stated that the design and development of new Mahindra Mojo’s engine have been completed. And now the powerful bike is undergoing its final phase of testing and will available soon in the market. The Mahindra Mojo features has been unveiled and they reveal that the vehicle is powered by a homegrown 300cc, single cylinder engine which is coupled to a 6-speed transmission.

Currently, the Mahindra is ruling the scooter segment and performing high with its well designed specifications. Addition to this the company is trying hard to launch a wide range of products, which will help them to appeal to a wider customer segment in both domestic and global automotive segment. This new motorcycle Mojo has been first showcased in the year 2010 and till date it is to be the much awaited motorcycle in the market. According to the recent source reports, the vehicle is expected to hit the market in 2014. The powerful 300 cc engine uses liquid-cooling and 4-valves to produces a peak power output of 26 HP and a maximum torque output of 24 Nm. The recent Mahindra Mojo pictures are currently available on various online sites and these reveals that the bike comes with a unique design along with a gold color on the sides.

Good thing is that the bike comes equipped with an electric start and an ECU ignition system inbuilt. Looks of this bike is trendy and stunning as it is packed with twin headlights. The Mahindra Mojo price has been revealed and it is to be placed at Rs. 175,000. It seems that the Mojo comes under the sports bike segment which is capable to deliver a fuel consumption of 30 kmpl on city roads and 35 kmpl on highway roads. The vehicle looks aggressive as the chassis of this bike is packed with a Twin Tube exposed frame in steel and diamond Frame.